Accent Speaker Technology was founded with the belief that it could bring the live musical experience to a broader number of people than had been previously reached. Carl Marchisotto's speaker designs have not only met this goal, but have been held in the highest regard by music lovers and reviewers alike. They have collected innumerable awards and won the praise of critics all over the globe.

RMAF 2019: Positive Feedback gave Nola their Audio Oasis Award: "This award is given to you due to the superior sound that I experienced in your space. Being in your room was a true Audio Oasis! moment -- relaxation, and getting into the music, instead of being driven out of the room!"

February 2017: Micro Grand Reference Gold wins stand-mounted speaker award from the very select AUDIO NIRVANA magazine. It was rated one of the best stand mounted speakers regardless of price by Joel Chevassus.

"The Boxer is an unassuming, 2-way, bass-reflex compact with a sound that's unerringly musical - a canny balance of warmth and detail. Images are vivid, and transient reflexes quick. This is not a shy, recessed presentation, nor is the treble brittle or fatiguing, Excepr for the slightest presence-range dip, there's substance to every octave, with very little dynamic compression. -NG, 203"

The imposing Nola Concert Grand Reference Gold loudspeakers driven by Audio Research Electronics connected by Nordost Odin cables, which was able to convey the grandeur and scale of a large orchestra. - Jim Hannon, The Absolute Sound

"For presenting a musical experience as close to "real" as I've ever heard, Nola and Audio Research win the 2013 Best Sound of the Show Jimmy Award." - James Saxon for The Audio Beat magazine.

2012 Editors' Choice Award: Nola Boxer: "The Boxer is an unassuming, two-way, bass-reflex compact with a sound that's unerringly musical -- a canny balance of warmth and detail. Images are vivid, and transient reflexes quick. This is not a shy recessed presentation, nor is the treble brittle or fatiguing. Except for the slightest presence-range dip, there's substance to every octave with very little dynamic compression. NG, 203."

2012 Editors' Choice Award: Nola Viper Reference III: "If you are frustrated by loudspeakers that occasionally impress in a hi-fi sense, but don't really allow you to focus on the music, TM found the open-baffle multiway ribbon/cone Nola Viper a breakthrough -- neutral, non-analytical, and highly musical. Tom Martin, 181 (Viper I reviewed; updated Reference III not yet auditioned)"

2012 Editors' Choice Award: Nola Metro Grand Reference: "Offering a tremendous sense of spaciousness, air and naturalness, this sonic marvel has an uncanny ability to transport you to the concert hall. Its custom Raven ribbon tweeter and Alnico-magnet midrange, mounted on an attractive open baffle, produce a reference-quality top end that mates seamlessly with a wonderfully open and seductive midrange. Bass from th twin 6.5" woofers, housed in separate chambers, is surprisingly powerful and extended with a slight touch of added warmth. These small-footprint speakers produce big beautiful sound on a wide range of music."

2012 Editors' Choice Award: Nola Baby Grand Reference II: "This large, ribbon/cone, quasi-line-source floorstander, designed by the redoubtable Carl Marchisotto, may not cohere quite as well as New School designs in the bass; nonetheless, it is one of the more lifelike speakers JV has reviewed -- and certainly the most successful ribbon/cone hybrid of his experience. With downright breathtaking treble, resolution, transient response, dynamic range, power-handling, and soundstanging, the Baby Grands invariably sound like the real deal regardless of program, which makes them those rarest of transducers -- loudspeakers that are equally adept at reproducing acoustic and electric music. JV, 205."

2012 Editors' Choice Award: Nola Metro Grand Reference Series II: "The finishing touches on this update to Carl Marchisotto's original Metro Grand Reference speaker were installed perilously close to the deadline for this issue. Before the modifications were made to the two ports (on the speaker's backside), the sound of the unfinished Metro update (not the original version) was somewhat cloudy, ill-defined, and minus both the midrange spaciousness and definition that all of Marchisotto's designs normally have. (We were told the update to the Metros that just arrived on the premises wasn't finished when we did our original listening, and I, for one, knew what to expect when the updates were complete.)

"The least expensive speaker in this new series of so-called reference systems is the Micro Grand Reference, which I reviewed in these pages and found remarkably smooth, open and airy. It underwent the updating some months ago. The updates are in the crossover system and designed to make the separate drivers perform more like a single driver (considered a theoretical ideal, but not a very practicably achievable one). In the redesigns of this and the other systems in the Reference line, Marchisotto's goal is to make the speakers in the systems sound as if they are one (by reacting together and coherently).

"To these ears, the Metro II completely outclasses the Micro Series II -- from top to a shockingly low, powerful, and air-moving bottom octave to its very smooth response at the outer edges of the frequency spectrum. And that is all I have to say about it, pending the upcoming full review. Hint, though: You can't go wrong with the Metro Series II. And I wish I had the time and room to say more, even knowing I don't yet have its measure." - HP

2010 Editors' Choice Award (Nola Viper Reference II): "If you are frustrated by loudspeakers that occasionally impress in a hi-fi sense, but don't really allow you to focus on the music, Tom Martin found the open-baffle, multiway Nola Viper Reference to be a breakthrough - neutral, non-analytical, and highly musical."

2010 Editors' Choice Award (Nola TBolt III Subwoofer): Harry Pearson wrote, "The addition of the Nola TBolt IIIs (still one of the cleanest, most musically natural of all those on the market) gave the power for the thunderous bass some movies require, without coloring the bottom octaves (as, say, on organ recordings) unnaturally." 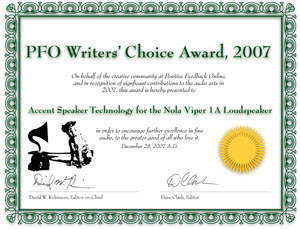